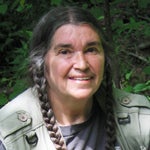 Bernadette Mayer received her BA from the New School for Social Research in 1967. She is the author of numerous books of poetry and prose, including Poetry State Forest (New Directions, 2008), Two Haloed Mourners: Poems (1998), The Desires of Mothers to Please Others in Letters (1994), Sonnets (1989), The Golden Book of Words (1978), and (1964). From 1967 to 1969, Mayer and conceptual artist Vito Acconci edited the journal 0 TO 9. With her husband, writer and publisher Lewis Warsh, she edited United Artists Press. She has taught writing workshops at The Poetry Project at St. Mark’s Church in New York City for many years and she served as the Poetry Project’s director during the 1980s. Bernadette Mayer lives in East Nassau, New York.

tomorrow we’ll see the lightbulb in schenectady,
go to gems farms in schodack, then on to howe caverns,
then to see the wayne thiebaud show at the clark
where we’ll stop to notice the melting ice sculpture
then excellent spinach sap soup at the thai restaurant
in williamstown, a brief stop at the octagonal museum,
on to northampton to see the smith college art museum
& greenhouse where we’ll see a green heron

it would be nice to be able to walk today
so we could go to opus 40 in saugerties
followed by a dinner of oysters & mussels at the bear
then on to check out the sheep at the sheepherding inn
where we’re able to buy riccotta cheese
which means twice-baked, with which we’re able
to make a pizza with fresh figs gotten from the berry farm
war what is it good for?
absolutely nothing