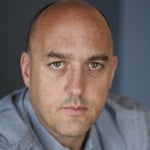 Ben Marcus is the author of several books, including the novel Notable American Women and The Age of Wire and String, a collection of short experimental fictions. His essays, reviews, and stories have been featured in Harper’s, The Paris Review, The New York Times, and Salon, among others. A recipient of a Whiting Writers Award, a fiction fellowship from Brown University, three Pushcart Prizes, as well as a Guggenheim Fellowship and a grant from the National Endowment for the Arts; Marcus is a faculty member at Columbia University, editor of The Anchor Book of New American Short Stories, and was the fiction editor of Fence for several years.

From The Dark Arts

On a dark winter morning at the Müllerhaus men’s hostel, Julian Bledstein reached for his Dopp kit. At home, he could medicate himself blindfolded, but here, across the ocean, it wasn’t so easy. The room stank, and more than one young man was snoring. The beds in the old gymnasium were singles, which didn’t keep certain of the guests from coupling when the lights went out. Sometimes Julian could hear them going at it, fornicating as if with silencers on. He studied the sounds when he couldn’t sleep, picturing the worst: animals strapped to breathing machines, children smothered under blankets. In the morning he could never tell just who had been making love. The men dressed and left for the day, avoiding eye contact, mesmerized in the glow of their cell phones.

–
Continue reading The Dark Arts at The New Yorker.