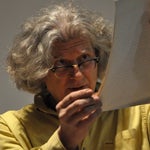 Poet, novelist, translator, critic, and scholar, Ammiel Alcalay is deputy chair of the PhD Program in English at The Graduate Center, CUNY, and former chair of Classical, Middle Eastern & Asian Languages & Cultures at Queens College. He was the first holder of the Lannan Visiting Chair in Poetics at Georgetown University and has been a visiting professor at Stanford University.

During the war in former Yugoslavia, he was one of the only translators working from Bosnian, and published widely, including Sarajevo: A War Journal by Zlatko Dizdarević and The Tenth Circle of Hell by camp survivor Rezak Hukanović. Other translations include Sarajevo Blues (1998) and Nine Alexandrias (2003) by Bosnian poet Semezdin Mehmedinović, Keys to the Garden: New Israeli Writing (1996), and the co-translation (with Oz Shelach) of Outcast by Shimon Ballas (2007). With Megan Paslawski, he co-edited Michael Rumaker’s Robert Duncan in San Francisco (City Lights, 2013).

He is founder and general editor, under the auspices of the Center for the Humanities and the PhD program in English at the CUNY Graduate Center, of Lost & Found: The CUNY Poetics Document Initiative, along with its offshoot Lost & Found Elsewhere, and has edited texts by Robert Creeley, Robert Duncan, Diane di Prima, Joanne Kyger, and Michael Rumaker for these projects.