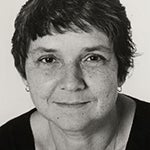 American poet and essayist Adrienne Rich was born in Baltimore, MD, and received her Bachelor’s from Radcliffe College. During her senior year, she penned A Change of World, which was awarded the Yale Series of Younger Poets Award. She was recipient of two Guggenheim Fellowships, the National Institute of Arts and Letters award, and the Bollingen Foundation grant for the translation of Dutch poetry, among many many others. In 1971, she received the Shelley Memorial Award from the Poetry Society of America, and the National Book Award for Poetry in 1974, which she accepted on behalf of all women. She published over 30 books before her death in 2012.

You show me the poems of some woman
my age, or younger
translated from your language

with Love, our subject:
we’ve trained it like ivy to our walls
baked it like bread in our ovens
worn it like lead on our ankles
watched it through binoculars as if
it were a helicopter
bringing food to our famine
or the satellite
of a hostile power

I begin to see that woman
doing things: stirring rice
ironing a skirt
typing a manuscript till dawn

trying to make a call
from a phonebooth

ignorant of the fact this way of grief
is shared, unnecessary
and political