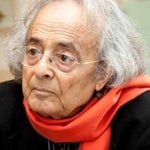 Adonis, the 2011 recipient of Germany’s prestigious Goethe poetry prize, was born Ali Hamid Saeed Esber in 1930 in the mountain village of Qassabin, Syria. According to Reuters, Adonis “hails from a long tradition of Arab poets who have acted as a force for modernity against strict interpretations of religious texts,” and writes the poet himself: “I think that I’m a wave, travelling, since the days of Gilgamesh, toward Beirut and the Arabs.”

Adonis is the author of numerous collections of poetry, most recently his Selected Poems (2010), translated by Khaled Mattawa. Adonis is also an essayist, editor, poetics theorist, and the translator of several works from French into Arabic. He currently resides in Paris.