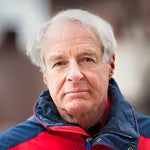 Born in New York City, Adam Hochschild is an author and a journalist. While earning his B.A. at Harvard, he worked on an anti-government newspaper in South Africa and, after graduating, worked as a civil rights worker in Mississippi. In the mid-1970s, he co-founded Mother Jones and has since published several books. Among them, his best-known are King Leopold’s Ghost; To End All Wars: A Story of Loyalty and Rebellion, 1914-1918; and Bury the Chains. He has been a Fulbright Lecturere in India, Writer-in-Residence at the Department of History, University of Massachusetts at Amherst, and Regents’ Lecturer at the University of California, Santa Cruz.

from Rape of the Congo

As if eastern Congo had not already suffered enough, seven years ago Nature dealt it a stunning blow. The volcano whose blue-green bulk looms above the dusty, lakeside city of Goma, Mount Nyiragongo, erupted, sending a smoking river of lava several hundred yards wide through the center of town and sizzling into the waters of Lake Kivu. More than 10,000 homes were engulfed. Parts of the city, which is packed with displaced people, are still covered by a layer of purplish rock up to twelve feet thick.

Far greater destruction has come from more than a decade of a bewilderingly complex civil war in which millions have died. First, neighboring Uganda and Rwanda supported a rebel force under Laurent Kabila that overthrew longtime dictator Mobutu Sese Seko in 1997. Soon after, Kabila fell out with his backers, and later Uganda and Rwanda fell out with each other. Before long, they and five other nearby nations had troops on Congo’s soil, in alliance either with the shaky national government in Kinshasa or with a mushrooming number of rival ethnic warlords, particularly here in the mineral-rich east. Those foreign soldiers are almost all gone now, but some fighting between the government and remaining rebel groups continues. For two weeks in June, I had the chance to observe the war’s effects, with the best of possible traveling companions: Anneke Van Woudenberg, senior researcher for Human Rights Watch, whose reports have been an authoritative source of information on the country for years.

Continue reading “Rape of the Congo” at The New York Review of Books.

Literacy, Literature and Democracy | April 7, 2010
Writing (and Working) Beyond Genocide:
Literary, Cultural and Social Activisms in a Changing Africa, Session I