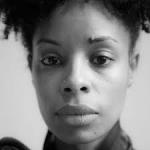 Nicole Sealey is the author of Ordinary Beast (Ecco, 2017) and The Animal After Whom Other Animals Are Named, winner of the 2015 Drinking Gourd Chapbook Poetry Prize.  Her work has appeared in The New Yorker, The New York Times, and elsewhere. Sealey holds an MLA in Africana studies from the University of South Florida and an MFA in creative writing from New York University. She is the executive director at Cave Canem Foundation.

Even the gods misuse the unfolding blue. Even the gods misread
the windflower’s nod toward sunlight as consent to consume. Still,
you envy the horse that draws their chariot. Bone of their bone.
The wilting mash of air alone keeps you from scaling Olympus
with gifts of dead or dying things dangling from your mouth—
your breath, like the sea, inching away. It is rumored gods grow
where the blood of a hanged man drips. You insist on being this
man. The gods abuse your grace. Still, you’d rather live among
the clear, cloudless white, enjoying what is left of their ambrosia.
Who should be happy this time? Who brings cake to whom?
Pray the gods do not misquote your covetous pulse for chaos,
the black from which they were conceived. Even the eyes of gods
must adjust to light. Even gods have gods.