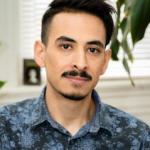 Marcelo Hernandez Castillo is a poet, essayist, translator, and immigration advocate. He is the author of Cenzontle (BOA Editions, 2018) a collection mapping a parallel between the landscape of the border and the landscape of sexuality through surreal and deeply imagistic poems, which was chosen by Brenda Shaughnessy as the winner of the 2017 A. Poulin, Jr. prize. His first chapbook, Dulce (Northwestern University, 2018), was chosen by Chris Abani, Ed Roberson, and Matthew Shenodaas the winner of the Drinking Gourd Poetry Prize. His memoir, Children of the Land (Harper Collins, 2020) explores the ideas of separation from deportation, trauma, and mobility between borders. He is a founding member of the Undocupoets campaign which successfully eliminated citizenship requirements from all major first poetry book prizes in the country and was recognized with the Barnes and Noble “Writers for Writers” award from Poets & Writers Magazine.

you called it cutting apart

I called it song

–
From The Paris American