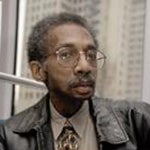 Lorenzo Thomas was born in Panama and moved with his family to New York in 1948. He attended Queens College and joined the Navy in 1968. After serving in Vietnam, Thomas moved to Texas. A writer whose work is both political and personal, he is the author of five poetry collections. Thomas was the recipient of a National Endowment for the Arts grant and the Houston Festival Foundation Award. A longtime resident of Houston, Thomas first moved to Texas as a writer-in-residence at Texas Southern University in 1973. He taught writing workshops at the Black Arts Center, through the artists-in-the-schools program, and as an English professor at the University of Houston’s downtown campus. Thomas passed away in 2005.

The land was there before us
Was the land. Then things
Began happening fast. Because
The bombs us have always work
Sometimes it makes me think
God must be one of us. Because
Us has saved the world. Us gave it
A particular set of regulations
Based on 1) undisputable acumen.
2) carnivorous fortunes, delicately
Referred to here as “bull market”
And (of course) other irrational factors
Deadly smoke thick over the icecaps,
Our man in Saigon Lima Tokyo etc etc