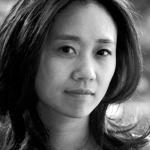 Jennifer Chang is a poet, scholar, and professor at George Washington University. She is the author of two books of poetry, Some Say the Lark (Alice James Books, 2017) and The History of Anonymity (University of Georgia Press, 2008). Chang’s lyrical poems often explore the shifting boundaries between the outer world and the self. She co-chairs the advisory board of Kundiman, a nonprofit organization that supports Asian American literature.

At the stables, each stall was labeled with a name.

Trapezoid mastered stillness: a midnight mare, she was sternest and tallest, her chest stretched against the edges of her stall.

I was not afraid of Never, the chestnut gelding, so rode his iron haunches as far as Panther Gap.

Never and I lived in Virginia then.

We could neither flee or be kept.

Seldom did I reach the little mountain without him, the easy crests making valleys of indifferent grasses.

What was that low sound I heard, alone with Never?

A lone horse, a lodestar, a habit of fear.

I fed him odd lettuce, abundant bitterness.
Who wore the bit and harness, who was the ready steed.

Or: I think there be six Nevers in the field.

He took the carrot, words by own reckoning, an account of creeks and oyster catchers.

I named my account “Notes on the State of Virginia.”

It was bred for show and not to race.

Were I more horse than rider, I would better understand the beast I am.

Our hoof-house rested at the foot of the mountain, on which rested another house more brazen than statuary.

Let it be known: I first mistook gelding for gilding.

I am the fool that has faith in Never.
Somewhere, a gold door burdened with apology refuses all mint from the yard.

Review: Some Say the Lark