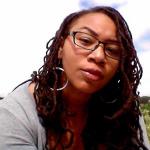 drea brown is a poet/scholar whose work has appeared in a variety of literary journals and anthologies, such as Southern Indiana Review and Stand Our Ground: Poems for Trayvon Martin and Marissa Alexander. Her chapbook, dear girl: a reckoning, winner of the Gold Line Press chapbook contest was published in 2015. A Cave Canem Fellow, and recipient of a Fresh Milk residency in Barbados, she is in the process of finalizing a poetry manuscript that furthers the journey, ghosts, and letters of Phillis Wheatley. Brown was the inaugural graduate from the African and African Diaspora Studies PhD program at the University of Texas in Austin in May 2017, and is currently a visiting assistant professor at Goucher College in Baltimore, Maryland.

flesh memory: an invocation in cento

what does a victorious or defeated black woman’s body look like?
are we ghouls?
children of horror? the joke?
a text, a language, a mythology a truth
you know no memory should live
in these memories

somebody anybody sing a black girl’s song

when you lay your body in the body becoming you
i want you to look at these scars
and be healed.