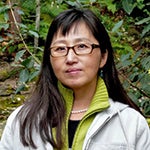 Don Mee Choi is a poet and translator who has received a Whiting Award and Lucien Stryk Translation Prize. She is a recipient of translation grants from Daesan Foundation and Literature Translation Institute of Korea, where she was born. Choi also translates for the International Women’s Network Against Militarism (IWNAM). She is an advisory editor for Action Books: Korean Literature Series. Choi lives in Seattle and teaches Adult Basic Education at Renton Technical College’s community-partnership site in Downtown Seattle.