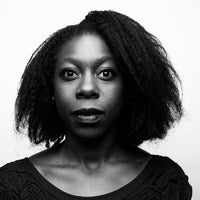 Dayo Olopade is an interdisciplinary activist working at the intersection of media and technology. She began her career as a journalist in Washington covering politics, policy, and the Obama administration. She spent two years in Nairobi as a New America Foundation fellow, reporting. The Bright Continent, a book on innovation, technology and opportunity in sub-Saharan Africa was published in 2014 and adapted for film in 2016.

She is a frequent advisor to startups, including Andela, Safara, and Cancer IQ. She sits on the board of Africa 2.0 and is a member of the African Leadership Network. A graduate of Yale College, Yale Law School, and Yale School of Management, she lives in London.

In a pleasing inversion of development logic, Africa has leapfrogged way ahead of the wealthy world. Though about half of Americans now have smartphones—driving major changes in the way we learn, work, and socialize—mobile innovation has only grazed the realm of finance. A 2012 report on global financial habits found that the most technologically advanced economies have actually been among the slowest to catch on to mobile money. Across sub-Saharan Africa, 16 percent of adults said they used mobile money. In all other regions, including Europe and the Americas, by contrast, that figure was less than 5 percent.

Compared with Africa’s mobile revolution, digital financial innovation in the U.S. doesn’t seem all that innovative. Sure, you can photograph a paper check to deposit it. Some apps link bank accounts to sleek budgeting interfaces. But the majority of third-party mobile apps simply replicate the desktop experience of balance transfers or bill paying. PayPal’s core product has remained roughly unchanged since the company was founded in 1998, while Square, the fast-growing service whose mobile attachments allow vendors to accept credit and debit cards for lower fees, hasn’t fundamentally changed the market—just adjusted revenue shares.

How did a continent still struggling to guarantee clean water and reliable electricity beat Silicon Valley to this groundbreaking mobile solution? After years of reporting on African innovation, I came to a conclusion both surprising and obvious: necessity drives creativity, and institutional failures accelerate the process of experimentation and problem solving.

Corruption Anxiety: From Perceptions to Action in Our Time | March 19, 2019