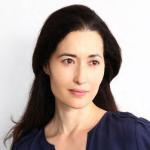 Charmaine Craig studied literature at Harvard College, received her MFA from the University of California at Irvine, and serves as a faculty member in the Department of Creative Writing at UC Riverside, where she particularly enjoys teaching literature, the art of the paragraph, and forms of narration. Her first novel, The Good Men (Riverhead), was a national bestseller translated into six languages. Her second novel, Miss Burma (Grove), longlisted for the 2017 National Book Award for Fiction, is based on the lives of her mother and grandparents, all born in Burma. Formerly an actor in film and television, she grew up in Los Angeles, where she now resides with her husband, author Andrew Winer, and their daughters.

There she is, Louisa at fifteen, stepping onto a makeshift stage at the center of Rangoon’s Aung San Stadium in 1956. Give yourself to them, she thinks. And immediately one hand goes to her hip, her head tilts upward, her awareness descends to her exposed thighs, to her too-muscular calves, now in plain view of the forty thousand spectators seated in the darkening stands.

Give them what they need, her mother told her on the way to the stadium. And Louisa understands that her mother meant more than a view of her gold high-heeled sandals (on loan from a friend and pinching her toes), more than the curves accentuated by her white one-piece (copied from a photo of Elizabeth Taylor). Her mother meant something like a vision of hope. Yet what is Louisa’s appearance on this garish stage, during the final round of the Miss Burma contest, but a picture of something dangerous? She is approximately naked, her gleaming suit approximately concealing what should be private. She is approximately innocent, pushing a hip to one side, close to plummeting into indignity.

A tide of applause draws her farther into the light. She pivots, presenting the judges and the spectators beyond them with a view of her behind (ample thanks to her Jewish father, who sits with her mother somewhere in the stands nearby). Before her now are the other finalists, nine of them, grouped in the shadows upstage. Their smiles are fixed, radiant with outrage. “The special contender,” the government paper recently called her. How strange to be dubbed “the image of unity and integration,” when she has wanted only to go unremarked—she, the mixed-breed, who is embarrassed by mentions of beauty and race. “We never win the games we mean to,” her father once told her.

She pivots again, crosses the stage, moving through a cloud of some nearby spectator’s smoke, her eyes landing for a moment on her parents. Daddy is slumped away from Mama, his balding head slightly turned, his docile look catching hers. Though under house arrest, he has contrived special permission to be here. It is even conceivable that he has somehow arranged for the pageant to be fixed. Beside him, Mama, with her demurring aspect, appears anxious, overly engaged in the proceedings. She seems to lift off the edge of her seat, her eyes alight with pride and accusation and something resembling anguish. Move! she mutely cries from her perch, as though to avoid capture by Louisa’s recriminating glances.

And Louisa does move—past her parents, downstage, to face a view of the smiling judges and the rows of eyeglasses glinting up at her, the rifles in the hands of the soldiers manning the stands. It feels nearly benign, the applause that gives way to a flurry of coughs; almost sweet, these whiffs of someone’s perfume, of putrefying garbage and dampness beneath the field; even liberating, this offering of herself, of her near nakedness. Aren’t they all compromised in Burma? They have been through so much.