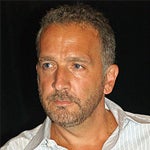 They were in a second-story office with a bank of windows overlooking D Street at 5th, in a corner row house close to the federal courts. Tom Petersen, big and blond, sat behind his desk, wearing an untucked paisley shirt, jeans, and boots. Spero Lucas, in Carhartt, was in a hard chair set before the desk. Petersen was a criminal defense attorney, private prac- tice. Lucas, one of his investigators.

A black Moleskine notebook the size of a pocket Bible was open in Lucas’s hand. He was scribbling something in the book.

“It’s all in the documents I’m going to give you, said Petersen with growing impatience. “You don’t need to take notes.”

“I can’t tell if you’re listening.”

“They took it up in Manor Park, on Peabody Street. Near the community garden, across from the radio towers.”

“Behind the police station?”

“Two. Unfortunately, my client, David Hawkins, was the one behind the wheel.”

“You just have him?”

“The other one, Duron Gaskins, he’s been assigned a PD.”

“How’d David get so lucky to score a stud like you?”

“I’m representing his father on another matter, said Petersen.

Lucas’s back had begun to stiffen. He shifted his weight in his chair. “Give me some details.”

Petersen pushed a manila file across the desk. “Here.”

“What do you want to know?”

“Steal the vehicle? That was easy. The boys were walking down the street, supposed to be in school, but hey. It’s early in the morning, cold as hell. You remember that snap we had back in February? This woman comes out of her apartment, starts her SUV up, and then leaves it running and goes back into the apartment.”

“She was heating up the Denali before she went to work.”

“She left the driver’s door unlocked, too. So naturally, being teenage boys, they got in and took the SUV for a spin.

“I would have, said Lucas.