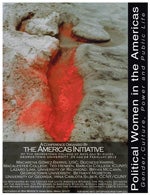 Presented by The Americas Initiative of the Georgetown College of Liberal Arts and Studies, Political Women in the Americas: Gender, Culture, Power and Public Life will bring together a group of mostly US-based, mid-career and rising scholars whose work explores the very contemporary dynamics of gender and politics as they specifically condition women’s lives across the new world.

From the rise of the female heads of state in countries as various as Chile, Argentina, Brazil and Costa Rica, to the political fates of female former guerilla fighters in the Central American civil wars, to the impact of social and other new media technologies on women’s political activism in countries like Cuba, to the emerging complications of political feminism from both the right and the left in the Obama/Tea Party-era US, the papers presented at the conference will focus on very specific, often regional, national and even local topics, and will at the same time in concert help us pose the larger hemispheric question: can we detect in what we see before us today something like a “New (World) Politics of Gender”? The conference is richly interdisciplinary, gathering scholars presenting fields as various as history, sociology, anthropology, American Studies, Latin American Studies, and Women’s Studies.

Gómez-Barris is an Associate Professor of Sociology, American Studies and Ethnicity at University of Southern California and the author of Where Memory Dwells: Culture and State Violence in Chile (University of California Press, 2009).

McCann is an Associate Professor of History at Georgetown University and author of The Throes of Democracy: Brazil Since 1989 (Zed Books, 2008).

9:30 AM | Valeria Buffo, Brief Presentation on “Women & Political Participation in the Hemisphere”

Buffo is the Director of Georgetown’s Political Database of the Americas.

Silber is an Associate Professor of Anthropology at CCNY/CUNY. She recently published Everyday Revolutionaries: Gender, Violence and Disillusionment in Post-War El Salvador (Rutgers UP, 2010).

Henken is an Associate Professor and Chair in the Department of Black and Hispanic Studies at Baruch College (CUNY). He recently published Cuba: A Global Studies Handbook (ABC-CLIO, 2008).

Moreton is an Assistant Professor of History and Women’s Studies at the University of Georgia. She recently published To Serve God and Wal-Mart: The Making of Christian Free Enterprise (Harvard UP, 2009).

Lima is the E. Claiborne Robbins Distinguished Chair in Liberal Arts and Professor of Latin American and Iberian Studies, and of American Studies at the University of Richmond. He is the author of The Latino Body: Crisis Identities in Amercan Literary and Cultural Memory (NYU P, 2007).

Harris is an Associate Professor of American Studies at Macalester College and the author of Black Feminist Politics from Kennedy to Obama (Palgrave MacMillan, 2009).