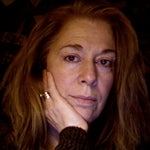 Look she said this is not the distance
we wanted to stay at—We wanted to get
close, very close. But what
is the way in again? And is it

too late? She could hear the actions
rushing past—but they are on
another track. And in the silence,
or whatever it is that follows,

there was still the buzzing: motes, spores,
aftereffects and whatnot recalled the morning after.
Then the thickness you can’t get past called waiting.