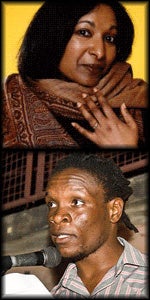 I was young when you came to me.
Each thing rings its turn,
you sang in my ear, a slip of a thing
dressed like a convent girl–
white socks, shoes,
dark blue pinafore, white blouse.

A pencil box in hand: girl, book, tree–
those were the words you gave me.
Girl was penne, hair drawn back,
gleaming on the scalp,
the self in a mirror in a rosewood room
the sky at monsoon time, pearl slits

pusthakam pages parted,
ink rubbed with mist,
a bird might have dreamt its shadow there

spreading fire in a tree maram.
You murmured the word, sliding it on your tongue,
trying to get how a girl could turn
into a molten thing and not burn.
Centuries later worn out from travel
I rest under a tree.

You come to me
a bird shedding gold feathers,
each one a quill scraping my tympanum.
You set a book to my ribs.
Night after night I unclasp it
at the mirror’s edge

alphabets flicker and soar.
Write in the light
of all the languages
you know the earth contains,
you murmur in my ear.
This is pure transport.

Ground-levelled, behind a line drawn,
he took aim at a circle of precious marbles,
precise, interrupting the passaging ants,
the shot was fired, and if they had known,
the other boys, that before speaking, the poet
of old had also bent and stroked the earth,
dividing himself from his people—
if they had known any poet—they would
have stopped him before the sun burst
from his fingers, scattering glass beads.

They found him with an empty third-eye
the bullet drilled into his forehead, a deaf
hole, knowing only its own darkness there
in the parched-grass field; flies whirred, unwavering,
a sun chariot’s axle-songs, heat rose a mirror
before his skull, and his mouth opened,
amazed to this mask, its bleached-stillness,
like a stone lit from the inside, faded
as a moon marked in the dust—at this face,
his mouth opened, amazed, stayed open.